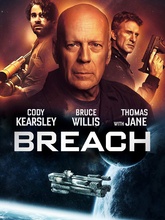 A hardened mechanic must find a way to protect mankind from total extinction.

Aaron Eckhart, Tommy Lee Jones anBruce Willis stars as Clay, a hardened mechanic selected to maintain an interstellar ark, leaving Earth during a catastrophic plague. Bound for a new planet, Clay and his small crew are responsible for the safety of the last surviving humans. But when a teammate is brutally murdered, the crew discovers a terrifying new threat: a vicious, shape-shifting alien creature whose goal is to wipe out the human race before they reach their new home. Hunted by their invisible enemy, Clay must find a way to fight what they cannot even see and protect mankind from total extinction.