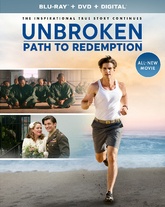 The next chapter in Louis Zamperini's inspirational true story that began with Unbroken.

Beginning where the hit movie Unbroken concludes, the next chapter brings the rest of Louis Zamperini's inspirational true story to life. After surviving years of torture as a prisoner of war, Louis (Samuel Hunt) returns home from World War II, where he meets and marries Cynthia (Merritt Patterson). Haunted by his past, he is driven deep into despair. But when Cynthia turns to God at the 1949 Billy Graham Crusade, her most fervent prayer for Louis is to find peace and forgiveness. Based on Laura Hillenbrand's bestselling book.