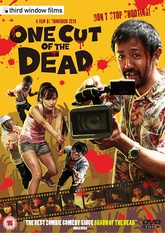 One Cut of the Dead

During the filming of a zombie horror flick, a real zombie apocalypse erupts.

A film crew is shooting a zombie horror flick in an abandoned water filtration plant, allegedly used for human experiments by the military. Just as the director browbeats his actors and demands more special effects blood, a real zombie apocalypse erupts, much to his auteur delight. Packed with meta-movie references as mocking as they are loving, this relentless takedown of the Living Dead genre is a total blast.