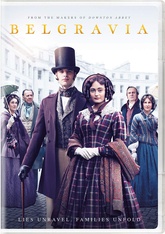 On the eve of the Battle of Waterloo two young lovers forge a legacy that will create scandal for generations to come. Years later, when the humble Trenchards (Tamsin Greig and Philip Glenister) move to Belgravia, they find themselves mixing with the venerated Brockenhursts (Harriet Walter and Tom Wilkinson). The families share a history that threatens inheritances and reputations; and there are those who would do anything to ensure secrets remain buried. Pride and loyalty will be tested, as forbidden love blossoms amongst the rivalry and lives hang in the balance. This 6-part drama is adapted by Julian Fellowes from his bestselling novel and features a stellar ensemble cast which also includes Jack Bardoe, Alice Eve, James Fleet, Tara Fitzgerald,